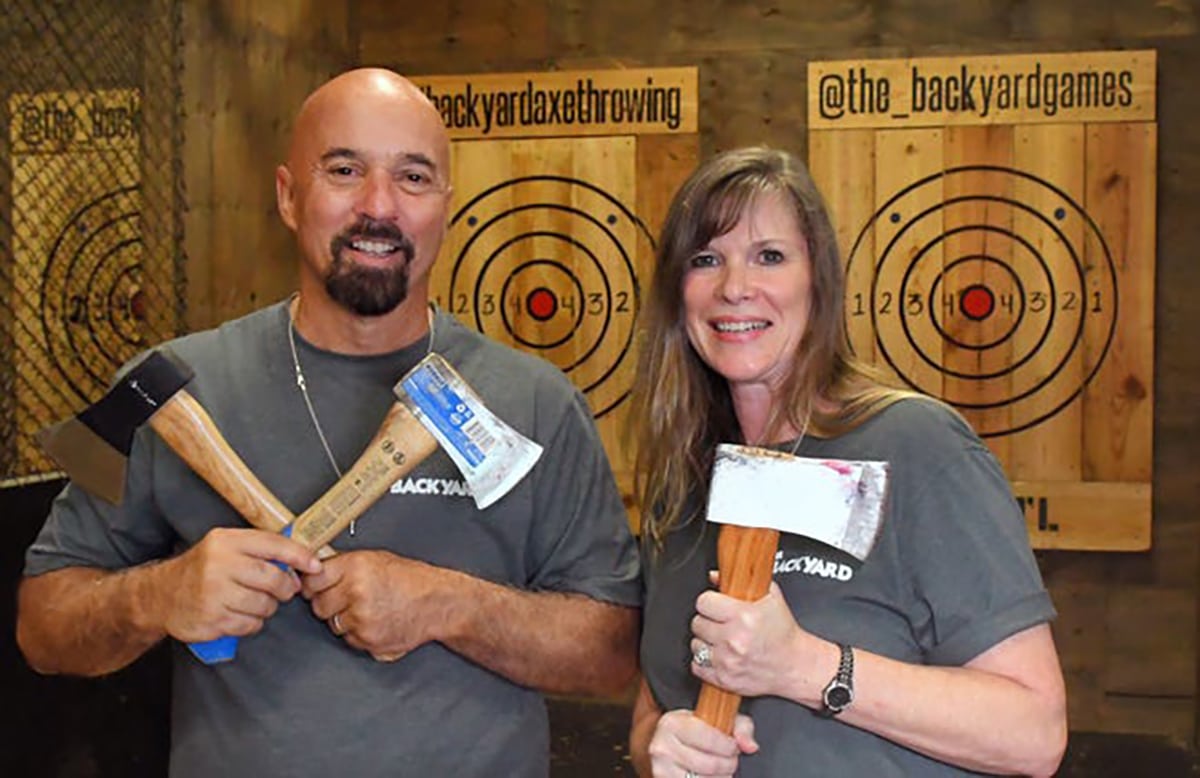 Years ago, Alexis Girard and her dad used to throw axes for fun at a human- shaped "zombie target" in their backyard.

Today, Girard works as an axe coach at The Backyard. The Florida Institute of Technology junior teaches newcomers how to hurl hatchets
overhand, impaling in wooden targets 12 feet away.

The Palm Shores indoor entertainment center on U.S. 1 is the first site in Brevard County to offer the trending sport of "urban axe throwing." Competitors aim axes at circular targets with red bull's-eyes, akin to
a dartboard.

"You come in here, you throw some axes, work out your problems of the day — you're ticked off at your kids, your wife, your husband, whatever, your boss," O'Grady said.

Plus, the facility will soon debut tic-tac-toe targets and an axe-throwing version of Battleship — competitors will aim at colorful painted silhouettes of aircraft carriers, battleships, submarines and cruisers.

"Recreational axe throwing is just a good time. It's like a target sport, just like darts or archery — but instead, you're throwing axes. I mean, what could be more fun than that, right?" Tami O'Grady asked.

"It's perfectly safe. A lot of people when they hear axe throwing, they're like, 'Oh my gosh, no.' It is very safe. There are rules and procedures that we abide by, and we teach our staff and also the customers when they come in," she said.

The Backyard is inside Adventure HQ's 33,000-square-foot indoor entertainment center at 5270 N. U.S. 1, Palm Shores. The building was a Giant Recreation World dealership showroom before reopening in 2017.

The O'Grady's own The Backyard, featuring axe throwing, bocce ball, pool, darts, cornhole and a café. They also own 321 Escape Room at the facility and the Escape Room Entertainment locations in Melbourne and West Melbourne.

The Backyard's axe activities are sanctioned by the WATL, which launched in 2017. WATL events are featured on ESPN, including last month's U.S. Open Tournament in Des Moines, Iowa. The 2019 World Championship Tournament is set for December in Tucson, Arizona.

The Backyard offers three varieties of throwing axes. One, the WATL throwing axe, clocks in with a 15-inch hickory handle and a 1.75-pound metal blade.

Children ages 10 to 17 must be accompanied by a participating legal guardian. Closed-toe shoes are required.